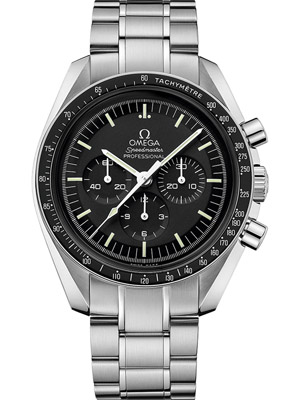 The Story Behind Omega Moonwatch

Since its introduction in 1957, the Omega Speedmaster Chronograph has been characterized by its precision timing, robust reliability, timeless design and it’s exploration in space.

Chronographs were originally built and advertised as tools for engineers, technicians, doctors and athletes – a way of keeping seconds, much like a stop watch – which made them less appealing as men’s casual wear. However, these qualities made the Speedmaster the perfect watch for marking some of America’s greatest achievements – including the first successful trip to the Moon.

In 1962 the first Omega watch made its debut in space, when astronaut Walter Schirra wore his personal Speedmaster during the Sigma 7 mission of the Mercury Program. Inspired by Schirra’s exploration, Omega adjusted the design of the Speedmaster’s case to accommodate larger pushers for easier stops and starts and easily readable white hour and minute hand markers (that still exist today).

Two and a half years after Schirra’s original mission, NASA requested quotes for wrist chronographs that could withstand the elements of space. Omega submitted the Speedmaster for NASA’s performance testing and was pitted against three other brands. NASA’s tests on the chronographs were designed to destroy the watches. From high pressure to high humidity, the tests challenged every aspect of the watches’ performance and in the end, only one watch survived – the Speedmaster.

July 21st, 1969 marked one the most famous days in American history as Apollo 11 safely landed on the moon. A mere six hours after landing, commander Neil Armstrong and pilot Buzz Aldrin took the very first human steps on the Moon’s lunar surface. While wearing a NASA issued Speedmaster, Armstrong spent several hours collecting rock samples before returning to the spacecraft to make the long journey home. Armstrong and Aldrin used the Speedmaster’s chronograph to time oxygen and fuel burn during their mission, which was critical in returning safely to Earth.

The Speedmaster earned the nickname “Moonwatch” after Apollo 11 and the following six lunar landings by American astronauts. It gained worldwide recognition and was even worn during the Apollo and Soyuz docking by both American and Soviet Union astronauts. In fact, the Omega Speedmaster Chronograph has been the only piece of equipment used in all of NASA’s space exploration from Gemini to the International Space Station program.